Covid-19 has undoubtedly been the greatest public health challenge of a generation. Almost one year ago, on 11 March 2020, the World Health Organisation (WHO) declared Covid-19, SARS-CoV-2, as a pandemic. One by one, countries across all continents enforced mobility measures to mitigate the spread of the virus and save lives. Despite these efforts, figures as of 1 March 2021, from the WHO state that the pandemic has already infected over 115 million people and caused 2.6 million deaths globally. The good news though is that effective vaccines are now available and preliminary results show that the virus spread is decreasing e.g. in Israel a rapid rollout of the vaccine prioritising older persons aged 70 years or over led to a 70% decrease in the ratio of Covid patients requiring ventilation support.[1]

The effort to develop vaccines in the shortest possible times, has been impressive and as of 1 March 2021, within just one year of the declaration of the pandemic, there were already 12 approved vaccines, 243 trials still running, and 90 vaccine candidates.[2] 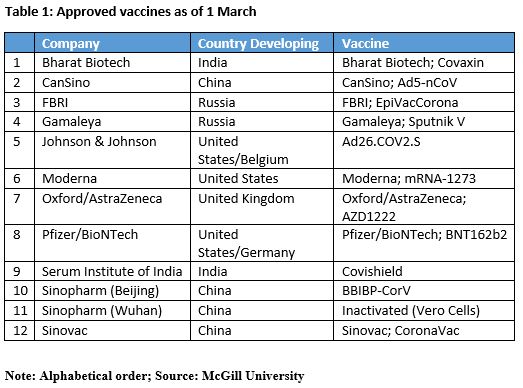 The production of the vaccines in such a short timescale is a major achievement. However, if we look at the bigger picture along the entire vaccine supply chain, there were challenges and issues, mostly trade-related that were overlooked.[3] Some of these challenges remain today.

The supply distribution of the vaccines is a “cold chain” one. If not stored at the right temperature the vaccines spoil. The transit of the vaccines across the continents from the point of production to consumers, needs to be under special time-sensitive conditions (fridges, temperature-monitoring technology, ice boxes, and even dry ice). Satisfying the special conditions is a challenge for many countries.

At the country borders, procedures and communication between border agencies and health regulatory authorities need to be timely and appropriate. Protocols for the entry of crew linked to vaccine distribution need to be revised also to quicken entry into countries.

At the endpoint of the distribution chain, once the countries receive the products, extreme caution is imperative to ensure the integrity of cold chains through the national quality infrastructure. The vaccines might be safe in the special containers but dispatching the vaccines to hospitals, clinics, and health centres has to adhere to proper delivery conditions.

Other risks need to be considered, such as market surveillance and enforcement authorities against counterfeit vaccines that could put lives at risk. On 3 March 2021, Interpol raised a global alert on the existence of a vaccine criminal network after 2,400 fake vaccines were discovered in a warehouse in South Africa.[4] Interpol fears that this could only be the tip of the iceberg as criminals exploit loopholes in shipment methods to transit fake vials. It is not surprising to also see scammers and sellers proposing Covid-19 vaccines on the dark market, eager to make money in the context of a lack of vaccine supplies in certain regions.

Figure 1: Map of development and distribution of vaccines 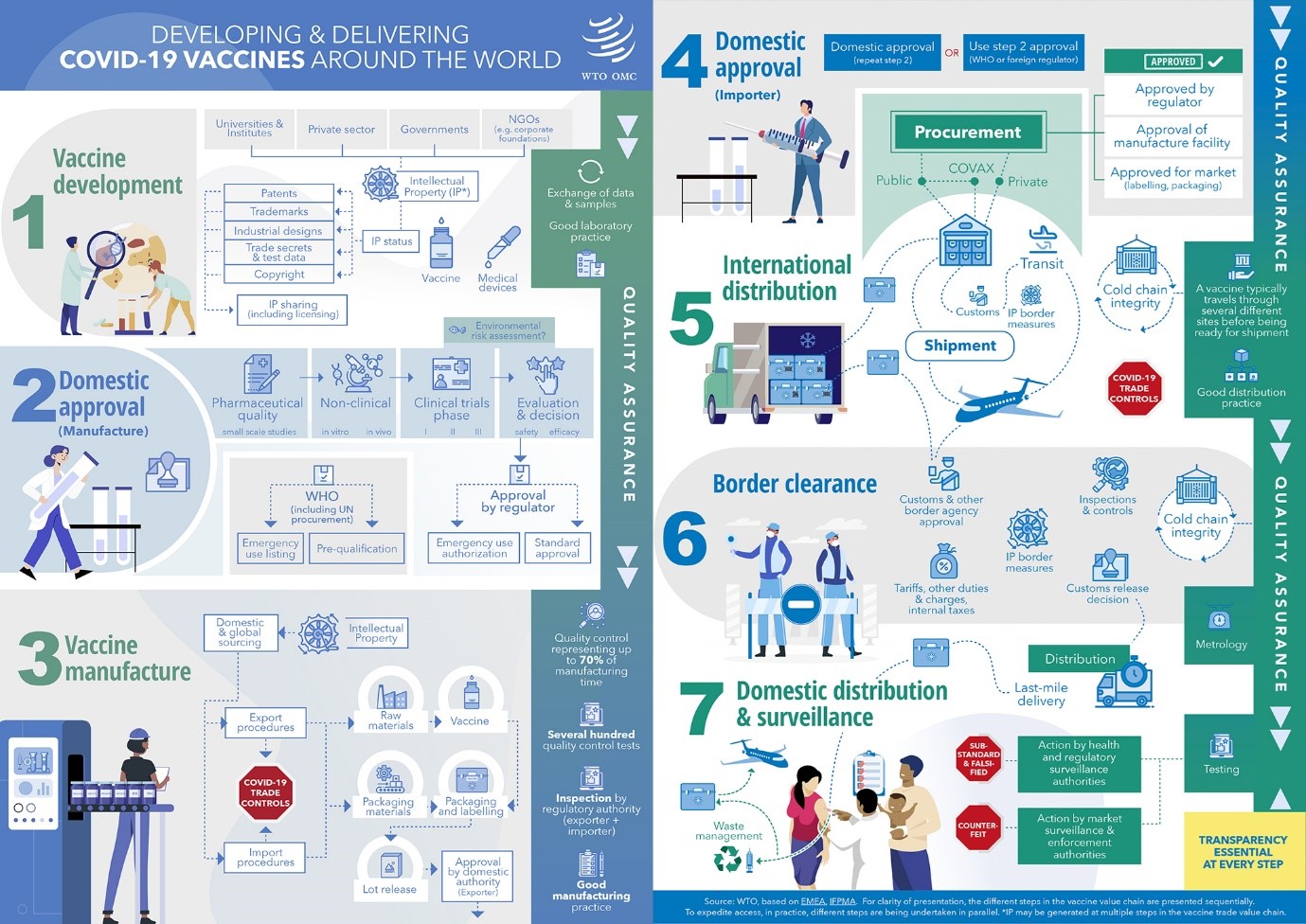 Trade is shifting to South-South Trade in vaccines

Despite the call for multilateralism from the WHO, world powers are competing for vaccines. According to The Economist, a country’s income level is one of the main determining factors of vaccine procurement. High-income countries who represent 16% of the world population have taken at least 70% of the supply of vaccines and are expected to achieve immunisation by the end of 2021, whereas, middle-income countries are expected to have complete access to vaccines by mid-2022. Africa, along with smaller developing economies will only have access to vaccines in 2023.[5]

Larger developing economies such as India and China, which have an edge due to their capacity to manufacture domestic vaccines and quick rollouts, will only be able to achieve immunisation by the end of 2022 due to their population size (The Economist, 2021). For most developing nations that lack resources for vaccine development or manufacturing, dependence on regional leaders for immunisation has become a reality. Thus, vaccines are being deployed based on existing alliances and diplomacy.

Distribution of the COVID-19 vaccine does not appear to follow usual trade flows for vaccines. Whereas European countries are traditionally the top exporters of human-made vaccines to low-income countries, such as those based in Sub-Saharan Africa, and Latin America and the Caribbean. However for Covid-19 vaccine distribution, Europe and other Western powerhouses such as the United States are said to have turned inwards, looking at first servicing their countries.

Developing countries with strong manufacturing capacities, like India, China, and Russia have seized the uneven distribution of vaccines as an opportunity to bolster their global status. They are rolling out diplomacy campaigns and helping the many small nations who struggle with supplies of vaccines.

As of 26 February, India had already sent over 361 million doses to countries worldwide. Bangladesh, Myanmar, Nepal, Bhutan, the Maldives, Mauritius, Seychelles, Sri Lanka, Bahrain, Oman, Afghanistan, Barbados, and Dominica have even been granted the vaccines as donations.[6]

China claims to be helping 53 countries as of 2 March. China is now one of the main suppliers of the Covid-19  vaccine (Sinovac) to Latin America. The fact that China’s vaccines can be stored in standard refrigerators, at 2-8 degrees,  is proving to be attractive to countries that are facing challenges to meet the special cold chain logistics needed in other vaccines such as that produced by Moderna and Pfizer.

As of 17 February, 26 countries have already accepted Russia’s “Sputnik V,”  including Latin American countries such as Argentina, Bolivia, and Brazil. Russia’s Sputnik V is even being requested by European countries that are struggling to get hold of other types of vaccines. Eastern European counties such as the Czech Republic, Austria, Hungary, and Slovakia have all expressed interest in procuring and deploying Russia’s vaccine. 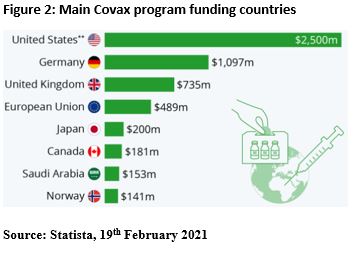 Amid all the complexities linked to access and distribution, it is reassuring that the world’s most vulnerable are still being supported through the WHO initiative, COVAX, whose aim is to supply around 6 billion doses of vaccines to poorer nations. The majority of the funders are from countries in the West.

However, this initiative only covers around 20% of the population of poorer nations, mainly frontline workers. COVAX supplies are also expected to be delayed due to access issues in the short to medium-term (The Conversation, 2021).

The cost of not vaccinating everyone

The decision of the wealthy countries to first vaccinate themselves might indeed protect their domestic businesses such as restaurants, shops, gyms, and other services. Still, the dependency on outside developing countries for materials, parts, and supplies as part of global value chains is prone to cause several major industries such as auto, construction, and retail to suffer.

A recent study commissioned by the International Chamber of Commerce (ICC)[7] found that uneven distribution of vaccines could be very costly for the global economy. Advanced economies with international linkages have the most to gain from global collaboration on vaccine access and distribution. If developing countries are deprived of vaccines, the loss to the global economy could be as much as $9.2 trillion and around half of the huge loss, $4.5 trillion would be endured by advanced economies. 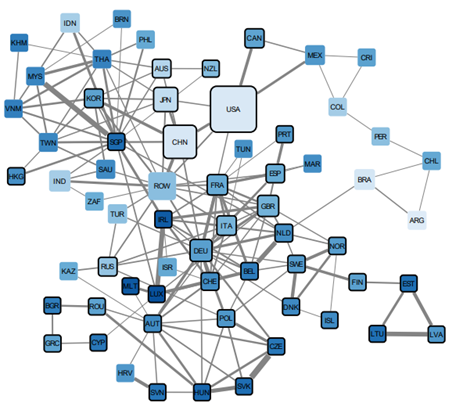 The impact of the Covid-19 pandemic both on global health and the global economy has been unprecedented. Over 2.6 million lives have been lost and it will take years for some economies and businesses to recover. The vaccines bring hope that Covid-19 spreading can be controlled. The effort to produce a vaccine has been impressive. The “Mumps” vaccine, first produced in 1967, after 4 years of research and development, held the previous record of fastest developed vaccine. In this instance, the scientific community surpassed themselves by producing this vaccine within 1 year, from concept to manufacturing.

While immunisation in the developed world is expected to be relatively speedy and completed by the end of 2021, the distribution of vaccines to developing and vulnerable countries will be slower. Disruptions in global supply chains caused by nationalist interests and complexities in logistics are frustrating the roll-out. This will only lead to slower immunisation rates globally.

According to research done through economic modelling, the slowness in vaccine distribution could severely impact the global economy. Trade linkages between developed and developing countries are very strong due to interdependencies as contributors in global value chains. The alarming predictions of a global economic loss of up to $9.2 trillion, with half of the loss endured by the OECD countries, cannot be ignored.

However, there is hope due to  improvements in immunisation rates as we observe a surge in the production of vaccines in countries like Russia, China, and India, and a prominent role in South-South cooperation. These countries are serving developed and developing countries and compensating for the lack of supplies from developed economies. The WHO’s COVAX initiative is also reassuring that the world’s most vulnerable countries will still be protected[8].

Many challenges remain, such as achieving equitable vaccine distribution,  managing supply chain and logistics risks, and combating counterfeits and criminal networks. Only global unity and collaboration will help to overcome these challenges as unilateral and nationalist efforts by countries to combat the pandemic are bound to fail. The president of the European Commission was clear on the need for a global approach: “A global pandemic requires a world effort to end it – none of us will be safe until everyone is safe”.  This is a clear example where the world must work together for the greater good.

[3] WTO Developing and Delivering Covid-19 vaccines around the world. Geneva

[8] As of now, 92 countries have subscribed to the Advance Market Commitment (AMC) programme underpinning the COVAX initiative.