Progress made since the UK left the EU

June 23, 2021, marked five years since the United Kingdom (UK) voted in a referendum to exit the European Union (EU). After four years of great uncertainty, the UK finally left the EU in January 2021 with a negotiated settlement called the EU-UK Trade Cooperation Agreement (TCA). The TCA eliminates tariffs and customs duties on goods as well as covers services, investment, digital trade, intellectual property, safeguards, amongst others[1]. However, the UK’s exit from the EU’s Single Market and Customs Union has challenged UK exports due to the new border rules and increased red tape[2].

Upon exiting the EU, the UK also agreed on deals to continue trading as normal with almost 63 of the 70 non-EU countries where trade was previously covered by EU FTA deals. In countries where deals have not been rolled over, trade preferences ended on 31st December 2020, thus subjecting them to WTO terms [3]. Countries shaded in orange in Figure 1 shows rolled over trade deals. 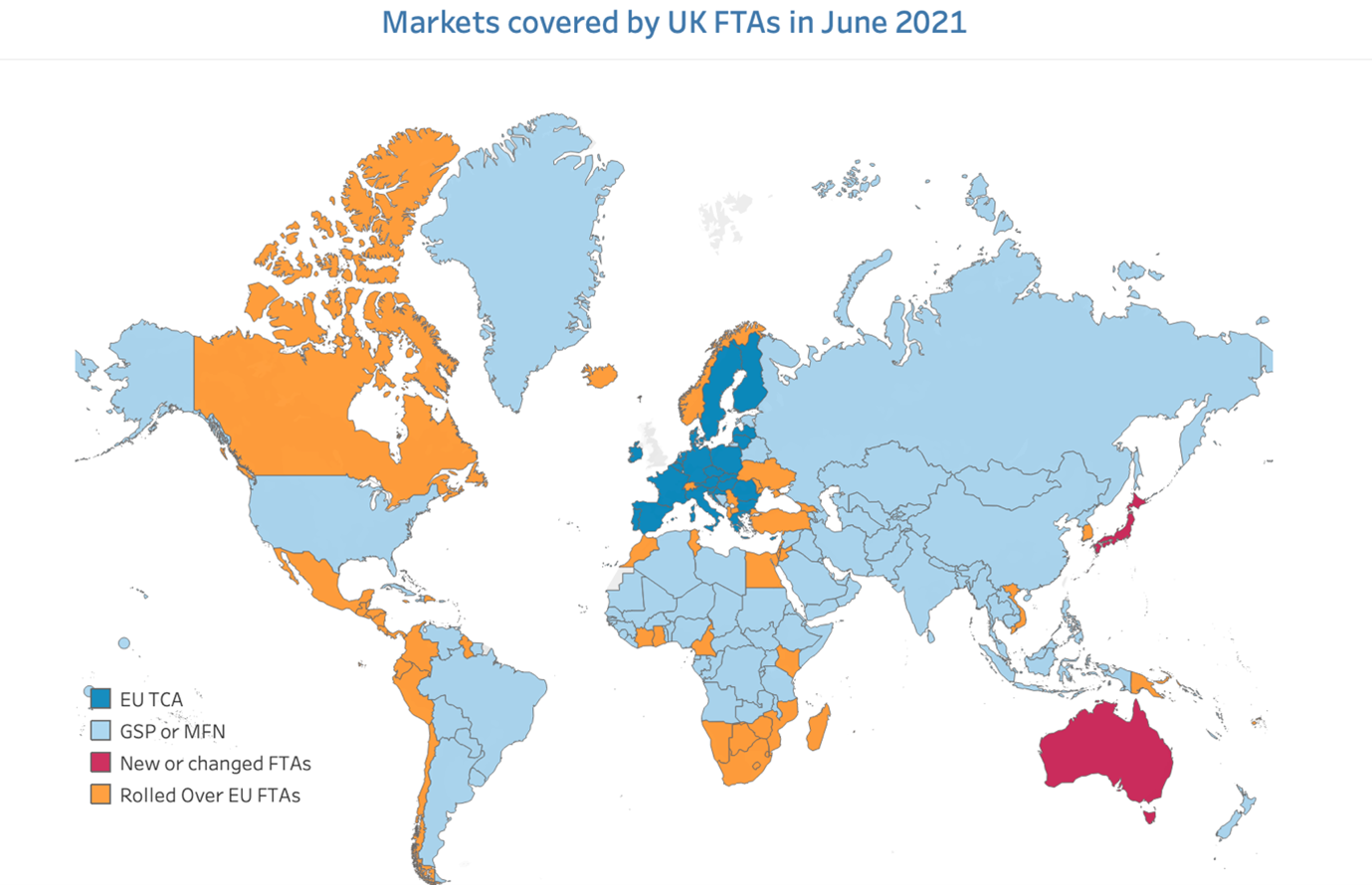 Source: IEC based on BBC, Gov.UK 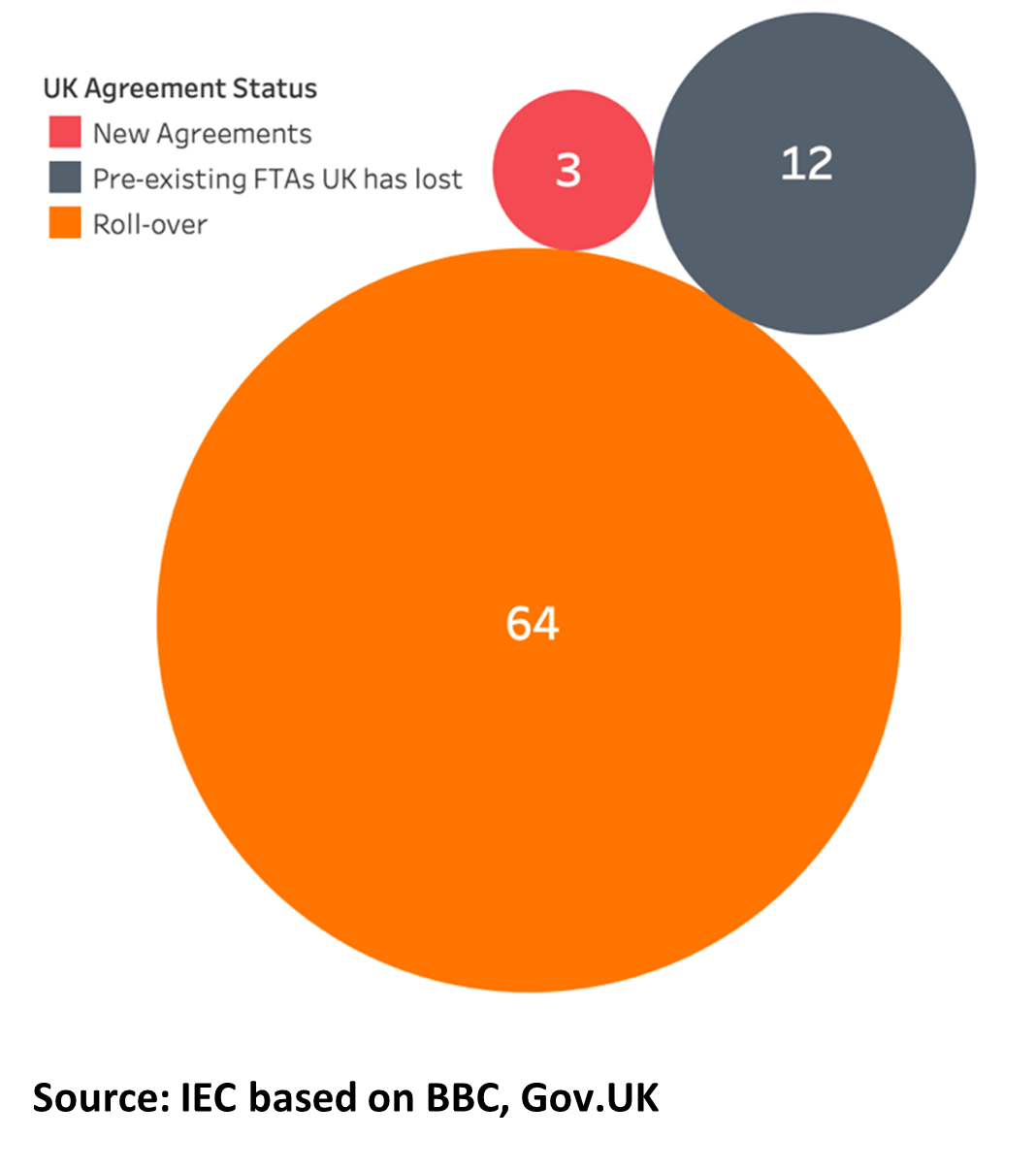 Amongst the UK’s new trade partnerships, Japan and Australia FTAs are the only 2 agreements that have been signed by the UK and not rolled over from pre-existing deals, with the exception of the EU TCA. The UK-Japan deal was signed during UK’s transition period, in October 2020, and represents a departure from the EU-Japan FTA, whereas the UK’s trade agreement with Australia was the first major independent trade deal for the UK post-Brexit. An FTA with Australia, UK’s 22nd largest export partner and 18th largest import partner, presents opportunities for businesses on both sides. The agreement aims to phase out tariffs and quotas over 15 years.

According to the UK’s Department for International Trade (DIT), the quantitative benefits of the agreement include an increase in exports to Australia by over £900 million, while increasing the UK GDP by an additional £500 million, a mere 0.001% of UK’s Q1 GDP for 2021[4]. Arguments in favour of the agreement consider businesses involved in the services sector, especially those involved in the supply of digital services. The DIT also sees the agreement as “[…]important in aiding the economic recovery from the coronavirus pandemic, by keeping markets open and diversifying supply chains”.[5]

However, the UK Australia trade deal could have serious implications for UK agriculture. In the past, the trade deals announced by the UK have mostly been rollovers of those that the UK was a part of while still in the EU. The EU deals were thus replicated, meaning the UK is working towards maintaining the status quo with those states. An EU based approach or template is already cautious concerning the impact on farmers and agriculture in general, with strict quotas and other safeguarding practises in place for sensitive sectors including agriculture.[6] In terms of the UK-Australia trade deal, a different scenario is observed. As the deal is solely based on the UK’s negotiations without reference to the EU, the trade deal indicates that long-term quotas have disappeared, and safeguards are fairly limited in scope. According to the Agriculture and Horticulture Development Board of the UK, “[…] there is talk of a 15-year transition period, to give British farmers time to adapt to increased competition. But the language feels very different, rather than being protected or safeguarded now it’s all about farmers preparing for the competition that is coming.” [7]

Moreover, critics of the deal have also emphasised the small progress of 0.02 per cent in the British economy over the 15 years, as a result of the removal of tariffs and quotas[8]. At the time of writing, only ‘broad terms’ between the countries have been agreed, with ongoing further negotiations. The full details of the deal are expected to be published by the fall of 2021 and are expected to come into effect only by late 2022.[9] The UK-Australia would also set a precedent for Britain’s future FTAs with other major economies like the USA or Brazil which would demand at least as good a deal.

A majority of the UK’s trade is concentrated with the EU. Imports and exports to and from the EU account for 46 per cent each and are thus covered under the UK-EU Trade Complementarity Agreement, which as mentioned earlier, is a less favourable agreement than the customs union. Analysing the TCA in comparison with a ‘No-Deal’ Brexit, an FTA with the EU would eliminate any tariff increases, but will add small increases in non-tariff barriers on trade. As highlighted by Fusacchia, Salvatici & Winters, “[…] the FTA has not delivered anything resembling intra-EU trading conditions.”[10]Moreover, it was also seen that the new non-tariff barriers and bureaucracy involved in UK-EU trade, post-Brexit account for the bulk of the economic cost compared to the tariffs that were dodged by the UK.

With respect to the UK’s rollover deals, those the UK were associated with while being a part of the EU, an estimated £117 billion worth of UK exports were destined to EU FTA member countries. To date, the UK has signed continuity agreements with the vast majority of countries that have agreements with the EU[11]. Thus, the UK’s rolling over of agreements was in response to the possibility of losing preferential access to these markets and the vulnerability associated with over 16 per cent of its exports.

The UK also rolled over negotiations with EFTA states Norway, Iceland and Liechtenstein intending to upgrade the continuity agreement that existed with the EU. The previous agreement that the UK was part of with these countries only covered trade in goods, however, the new EEA EFTA States – UK Free Trade Agreement now also covers services and investment, digital trade, capital movements, government procurement, intellectual property, amongst others[12].

A large proportion of UK trade is still covered by the Generalised Scheme of Preferences (GSP) to developing countries and Most Favoured Nation (MFN) tariffs or also known as UK Global duties. Moreover, the UK has recently started negotiations to join yet another trade bloc, the Comprehensive and Progressive Agreement for Trans-Pacific Partnership (CPTPP), which would give access to 11 Pacific Rim markets: Australia, Brunei, Canada, Chile, Japan, Malaysia, Mexico, New Zealand, Peru, Singapore and Vietnam for the UK. The agreement also adds up to the UK narrative of trade in digital services that the UK has in place with the EU TCA, Japan and Australia. The CPTPP will loosen restrictions on services and digital trade to reach some of the fastest-growing nations[13].

The CPTPP would enable the UK to secure higher-level agreements with its members and, where deemed beneficial, would replace the existing terms of bilateral trade agreements between the UK and its partners. This includes the new Japan-UK Comprehensive Economic Agreement (CEPA) and the six continuity agreements that, post-Brexit, extend the UK’s pre-existing EU trade commitments with Canada, Vietnam, Singapore, Mexico, Chile and Peru[14].   Concrete benefits listed by the government include:

In total, CPTPP nations account for around 9% of UK exports. UK trade with the group was worth £111 billion in 2019, growing by 8% a year since 2016. It will be challenging to join, and the conditions are unlikely to be flexibly negotiated by the existing parties.

For businesses, producers and exporters in the UK, it will be essential to capitalise on the new trading arrangements while identifying the material impact on operations due to the simultaneous loss of preferences. Businesses will need to closely monitor future trade negotiations and determine their impact on their trading arrangements.

A platform to engage effectively with UK bodies to convey business sentiment in terms of issues and priorities will be essential to make businesses feel understood during negotiations. This still needs improving. Moreover, information on new deals and what they mean remains weak, while the honest discussion of what has been lost, and how to make up for the shortfall, is still not being addressed.

International Economics (IEC) is building a dashboard to track progress on the post-Brexit FTA environment, and will continue to play a role in the UK’s All Parliamentary Party Group on Trade.  IEC is also playing a critical role to businesses by providing advisory on the smooth transition of businesses and exporters to the new trading arrangements.

Paul Baker is the founder and CEO of IEC, based in Mauritius. He is a consultant for various G20 governments and developing countries, an adviser on corporate global strategy to multinationals, and is a Visiting Professor at the College of Europe.

[3] A. Gladen (2021). Trade after BREXIT – How’s it going so far? IHS Markit. 7 April 2021. Available at: https://ihsmarkit.com/research-analysis/trade-after-brexit–hows-it-going-so-far.html

We use cookies to ensure that we give you the best experience on our website. If you continue to use this site we will assume that you are happy with it.OkPrivacy policy