Observations on the Economic Response by Island States to COVID-19

In this pandemic of global proportions, is being an Island State a blessing or a curse? While being sea-locked allows for the rapid adoption of containment measures, it fails to serve as a cushion against, and potentially even exacerbates, the economic shocks on the national economy. We discuss how some island economies are faring in the COVID-19 crisis and provide and analysis of the financial impact on their economies.

The world is facing its first global pandemic in a century. As it unravels, every day we get new information about the propagation. Few countries, if any, have been spared, although the spread has occurred unevenly over the past three months. 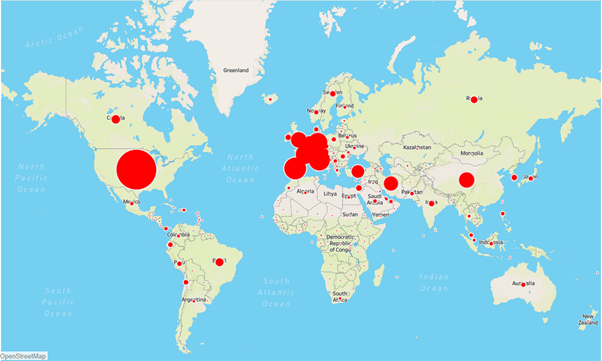 Source: World Health Organization, as of 12th April 2020. Size of the bubbles: Number of confirmed cases

Different strategies have been followed by different countries, with lessons already emerging from the diverse trajectories taken. Having been hit by cases later than many of the larger mainland countries has been a blessing for islands, allowing them to learn from others and it is arguably easier to apply restrictions on people’s international movements from entering their territories given the natural border.

At the same time, most islands have massive trade dependencies, which means a negative global shock will impact them harder. This is especially true for those who depend heavily on tourism, or for those with a huge net food import dependency.

So, is being an island a blessing or a curse in dealing with a pandemic of global proportions?

In this first of several short articles, we are reporting on the approach taken by several islands in dealing with the crisis.

Source: Population data from World Bank(2020), Medical doctors info from WHO(2016-2017); Number of cases from  Center for Systems Science and Engineering (CSSE) at Johns Hopkins University (JHU) (as of 16 April 2020

The trajectory of cases and deaths are reported in Figures 2 and 3, with data taken from the World Health Organisation (WHO). Among the seven selected island countries, Comoros and the Solomon Islands have reported zero cases and deaths on the day of this article. Sri Lanka is going through the third month with 238 cases and 7 deaths. The country is reportedly militarising its fight against the pandemic and is seemingly successful in keeping the number of daily new cases low. Entering the fight somewhat later than Sri Lanka, Mauritius has seen a sizable increase in the total number of cases compared to other island countries that are going through the same initial 30-day phase since the first cases. In the latest news, Mauritius has reported three days without any new cases, which is probably the result of the nation-wide curfew announced one month earlier. However, insufficient testing capacity in many countries suggests that the publicly available figures most likely understate the actual number of infected. 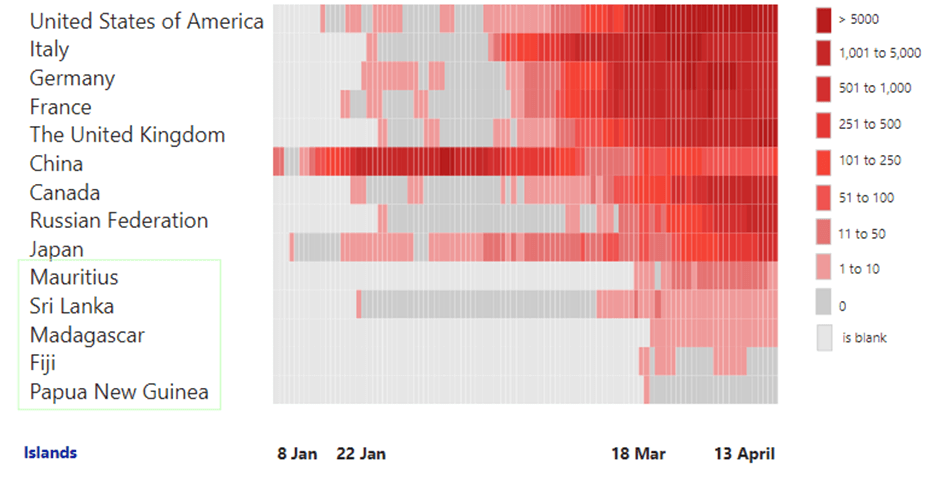 Source: World Health Organization; Data as on 13th April 2020.
Note: Comoros and Solomon Islands have reported no cases on the day of this article.

Source: World Health Organization; Data as on 13th April 2020.
Note: Comoros and Solomon Islands have reported no cases on the day of this article.

While the priority should at this moment be put on mitigating the human casualties from COVID-19, it is important for developing island countries to formulate the right response to mitigate as far as possible the impact of the virus on their economies also. The selected islands are characterised by one or more of the following features:

These factors make developing islands vulnerable to a higher level of exposure to external economic shocks.

Amongst the selected islands, Mauritius ranks with a high level of exposure: high openness to trade, high dependence on tourism, high population density (and thus higher infection risk), relatively low maritime connectivity, and a major deficit in trade for food items. With this combination of all vulnerable factors, Mauritius should be hit the hardest without preventive measures before the epidemic reaches the advanced stage on the island. It should be noted that for island countries that have no officially confirmed COVID-19 identified cases, impacts on the economy are still felt from the preventive lockdown and declining tourist arrivals.

Different countries will adopt different containment and economic policies according to their pre-determined acceptable risk thresholds. In low-income countries with weak health systems, the pandemic has pushed governments to take draconian measures, including stopping all but essential activities nationwide. Thanks to their sea-locked geography, island countries have been able to rapidly adopt containment measures ranging from closing borders and international travel bans to school closures and nation-wide curfews. However, probably due to limited capacity and resources of health services, an expanded testing scheme has yet to be observed in these countries. Acting fast is the key to slowing down the infection (World Bank, 2020, p.33).

Table 3 Containment Measure in response to COVID-19, by country

In terms of economic measures, among others, according to the IMF’s policy tracker’s weekly updates, 193 countries have announced policy measures to mitigate the virus’ impact. These can be broken down into fiscal, monetary and macro-financial policies. Varied in their actual scope and coverage, these policies share the common goal of preventing excessive economic disruptions to households and businesses, ensuring that these economic actors will be nurtured back on their feet and resume operation once the medical emergency abates.

Being only in the initial phase of the epidemic and learning lessons from the epicenters, developing islands seem to be doing well in terms of quickly rolling out containment measures to keep the infection numbers under thresholds. However, owing to multiple vulnerable factors as above-mentioned, these countries will feel the economic impacts more clearly if they enter the advanced phases of the epidemic. The island economies are often narrowly focused on a few sectors, such that national production is not sufficiently diversified to satisfy the variety of consumption needs by consumers. Often these islands rely on economies of scale production by producing just a few products, whose surplus is then exported, in order to be able to import the missing essential goods for the population. While the lockdown has not halted trade altogether, it has raised significant costs, delays and barriers, reduced frequency of shipments (by air and sea) and made it much harder for islands to survive. More can be done in the area of trade facilitation, as will be explored in subsequent articles.

The World Bank (2020). The Economy in the time of COVID-19. Semiannual Report of the Latin America and Caribbean Region. Available at https://openknowledge.worldbank.org/handle/10986/33555.

[ii] The extensive Theil index is calculated for each country/year pair as: TB = ∑k (Nk/N) (µk/µ) ln(µk/µ), where k represents each group (traditional, new, and non-traded), Nk is the total number of products exported in each group, and µk/µ is the relative mean of exports in each group. Lower values of the Theil index indicate higher diversification.

[iii] The UNCTAD Liner Shipping Connectivity Index defines connectivity using factor analysis of data on capacity and utilization in the liner shipping sector, including the number of carriers, the number of bilateral links between national ports, total vessel capacity and number, the number of direct services, and the size of the largest vessel on each route. The resulting index, which is a weighted average of those data, indicates a country’s integration level into global liner shipping networks compared to the highest average performance at 100 in the base year 2006.