This article describes the evolution of the pandemic in 24 islands states with a population of over 100,000 comparing it with the trajectory of Mauritius. We show that islands which acted early, taking tough lockdown measures with relatively long containment periods, have managed to better control the spread of the virus, than those countries that did not.

Mauritius followed the “Act fast. Act now. Keep the lights on” approach, rather than the ‘act slow immunisation strategy’ followed by Sweden and the UK. The Mauritian health authorities followed the contact-tracing route. Figure 1 shows no active cases as of May 17, with the last reported case on April 25. Tests have been carried out on approximately 17 percent of the population ranking Mauritius in the top 7 percent in the Our World in Data (OWD) database and ranked first in Africa with respect to COVID-19 testing. Initially those in quarantine were remaining tourists and returning nationals. Starting in May, the increase in quarantine numbers reflects returning nationals, healthcare and at-risk workers. 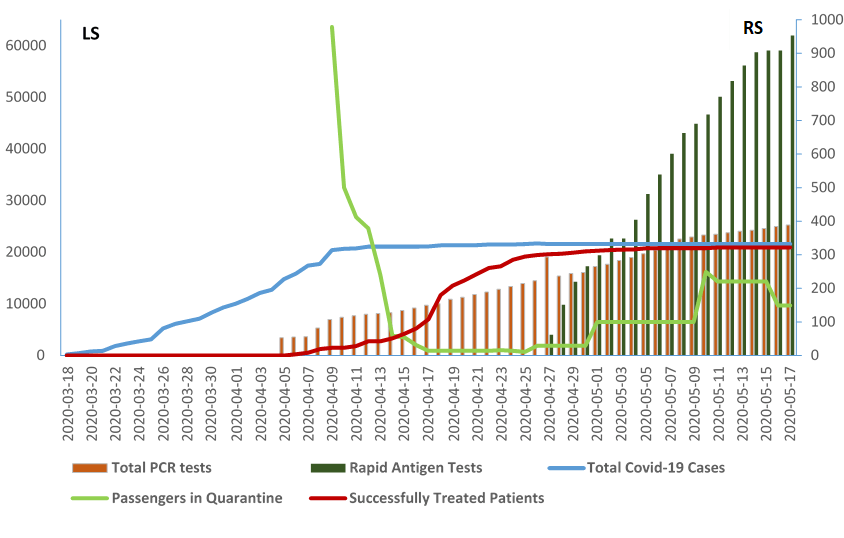 Source: Authors’ Compilation from BeSafeMoris, 2020; https://besafemoris.mu/stats/
Notes: (1) Number of deaths as at date is 10. First Death was on 21st March 2020 and the 10th Death was on 27th April 2020 (2) LS: Number of PCR tests and Rapid Antigen Tests (3) RS: Number of COVID-19 Cases, number of passengers in quarantine and number of successfully treated patients from COVID-19 (4) Data on the number of passengers in quarantine are not available before 09 April 2020.  The data may also include front liners who were quarantined as a result of their direct exposure with the virus.

With 10 deaths, the naïve Case Fatality Rate (CFR), a standard estimate of the lethality of a pandemic is 3 percent. Crosschecks suggest that this CFR estimate is accurate. First, all cases are closed.  Second, total deaths in Mauritius for the period January to April 2020 is lower than for the corresponding period in 2019. This lower death rate is attributable to the lower deaths from road accidents that average around 12 to 13 deaths per month (the average monthly death toll from road accidents was 7.5 over the last five years, Statistics-Mauritius, 2020), which more than compensated for deaths attributed to COVID-19. In addition, average deaths linked to the respiratory system were less during the first three months of 2020 than during the corresponding months in 2019.

Figure 2 shows the timeline of the containment measures. Importantly, precautionary measures were taken early on. Starting on January 22, health authorities screened passengers on arrival from a growing number of countries. Suspected tourists were sent to quarantine starting in early February, with results from tests sent to Germany and South Africa for double checking. Starting on February 23, passengers arriving from infected regions were denied entry, culminating in entry denied for foreigners arriving from Réunion, the EU, the UK, Norway and Switzerland starting on March 16.  These early precautionary measures must have contributed to a relatively small pool of cases when the first three cases were announced on March 18.

Two days later, a strict sanitary lockdown (only health and essential workers could move around) was put in place for 7 days with a re-opening of supermarkets under strict sanitary conditions from March 30. This lockdown was extended twice until June 1 with the re-opening of the economy in phases, starting with government services in addition to essential services on May 15. Daily progress reports by the cabinet and health officials were aired each evening. People were warned of severe penalties for breaking the confinement measures and for issuing false news.

Source: Authors’ Compilation from BeSafeMoris, https://besafemoris.mu/stats/ and Press Announcements, 2020
Notes: (1) WAP: Work Access Permit (2) WFH: Work From Home (3) WAS: Wage Assistance Scheme. The scheme targets businesses in the private sector and their employees drawing a monthly basic wage of up to Rs 50,000. (4) SEAS:  Self Employed Assistance Scheme.  The aim of the scheme is to assist self-employed persons who have suffered a loss in revenue as a consequence of the lockdown. (5) *Customers are allowed to enter supermarkets as per alphabetical order on specific days. They must have their national identity cards and wear masks.  Basic essential products are also limited to 3 units per person.

A dashboard of COVID-19 spread across island states

To check on how COVID-19 has spread across islands, we take all island nation states in the Our World in Data (OWD). We exclude Australia, a continent, but include all States with a population exceeding 100,000 (i.e. we exclude Seychelles). We also exclude several tourist-dependent islands that are part of a country (e.g. Bali, French, Portuguese, and Spanish islands).  The 24 countries with sufficient data as of May 17 are reported in Figures 3 and 4.

Figure 3 displays countries by alphabetical order with population and GDP per capita next to the country name. For each country, the number of total cases (active and closed) is reported as a bar with the date of the first reported case on the top of the bar. A second bar shows the cumulative number of total (CPR and antigen) reported tests per thousand. Note that there is no data for Comoros, a very small number of tests for Suriname, Sao Tome and Principia and, surprisingly, for Sri Lanka, one of the first countries to report.  Note that not only the data are not strictly comparable, and it could be that some countries only report positive results.

Figure 3 also reports a stringency index score at the beginning of the second week after the first case. This is to detect if countries has pursued different strategies. A slow start could reflect time to agree on the course of action or a deliberate strategy to immunize the population, a strategy deliberately followed by Sweden and the UK.

Figure 4 is a snapshot of where we stand. It plots total deaths on the vertical axis and total cases on the horizontal axis. The straight lines show equal case fatality rates. For example, Malta has a case fatality rate of 1%, New Zealand and Cyprus 2% and Mauritius 3%. Take two examples. Bahrain, the second highest per capita income in the group reported early, and tested a lot (Figure 3). Yet, Bahrain has the lowest case fatality estimate in the sample (Figure 4) while it is still far from closing. Sri Lanka reported its first case on January 27, is the most populous, has virtually the lowest fatality rate, but like Comoros, Fiji, Guinea-Bissau, Haiti, and Sao Tomé, it has no data on tests nor on containment measures.  At best, available data allow for caveat-ridden comparisons.

A first observation is the absence of regularities across the islands. Eye balling the data in Figures 3 and 4 shows diversity across all dimensions. In Figure 3, there is no correlation between case rates and population, per capita GDP, date of first case or the stringency index.  Figure 4 also shows a large disparity in total cases. Ireland, Singapore and Dominican Republic have reported around 10,000 cases each and a considerable number of deaths, although there is a cluster of countries with approximately 10 reported deaths. 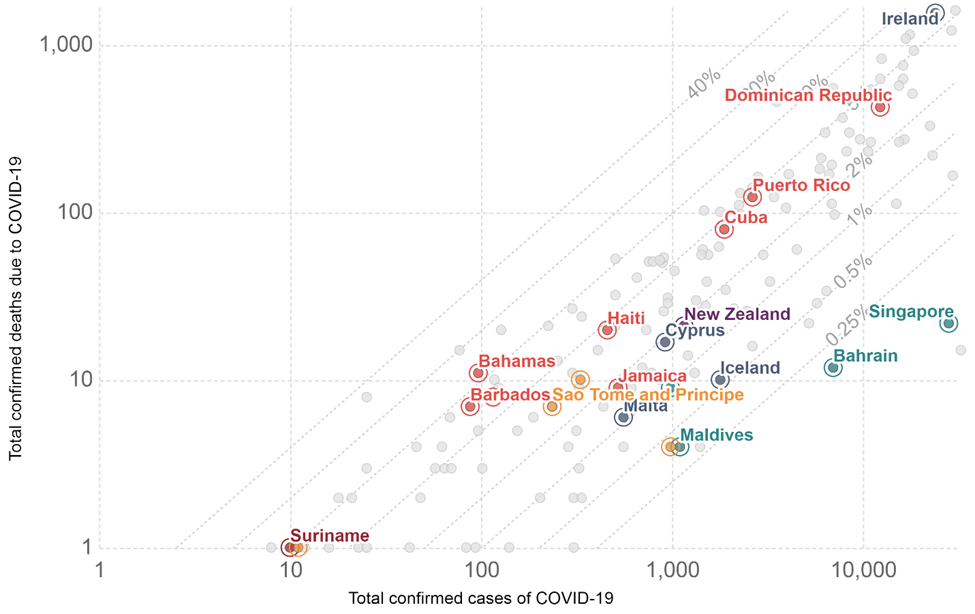 Source: Authors’ Compilation from Our World in Data, 2020.  Note: The figure above covers only 23 islands out of 24 since there is no data for Fiji.

As a concluding note, the analysis reveals that Mauritius has been responding relatively well as compared to a number of other islands and even globally. The various statistics (including total number of cases, death rate, closed cases, COVID-19 test performed, among others) tend to point to the Mauritian approach of “Act fast. Act now. Keep the lights on,” to have been relatively effective in limiting the spread of the disease so far.