Coronavirus : An African Perspective on the ‘Great Lockdown’

The continent started the year with a projected 3.9% growth for 2020 by the African Development Bank (AfDB). Less than four months into 2020, Africa is now under threat of its first recession in 25 years, due to the impact of the COVID-19 pandemic. The economic outlook can expect a major blow in the wake of the coronavirus.

The continent started the year with a projected 3.9% growth for 2020 by the African Development Bank (AfDB). Less than four months into 2020, Africa is now under threat of its first recession in 25 years, due to the impact of the COVID-19 pandemic. The virus has quickly spread across the world, with more than 2 million detected cases and around 150,000 deaths. In Africa, around 30,000 people have tested positive, and around 1,400 have died, as of 27 April 2020.

Countries are taking measures to contain the spread, but such measures are also affecting the economy, with travel bans and activities suspended in major sectors. The global recession that has been announced, nicknamed the ‘Great Lockdown’ by the international media, will not spare the African continent. In effect, compounded with the problems already present on the continent, the COVID-19 crisis may very well plunge the region into an unprecedented economic situation.

Different predictive models all point towards an African recession for 2020

In its latest edition of the bi-annual report ‘Africa’s Pulse’, the World Bank predicts that the growth rate will fall from positive 2.4% in 2019 to between negative 2.1% and negative 5.1% for the Sub-Saharan region. The COVID-19 crisis, according to the report, will cost the region between USD 37 billion and USD 79 billion in output losses. This is mainly due to trade and value chain disruptions, reduced remittances, a decrease in foreign direct investment (FDI) and foreign aid, disruption to the tourism and travel sector, and the direct impact itself of the contagion on health systems and the direct effects of the containment measures taken by governments. 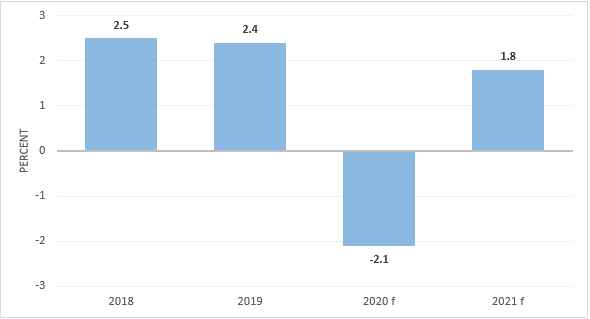 In modelling four different scenarios, global management consulting firm, McKinsey, predicts the growth rate for the continent to fall between five and eight percentage points. In the most optimistic outcome, in a situation where a recovery and gradual economic restart for the rest of the world with no widespread outbreak in Africa, Africa’s growth rate will be just 0.4%. In its worst-case scenario, the firm predicts a growth rate of negative 3.9%. The impact will be felt differently across the continent, with the various countries being impacted at different levels, through falls in commodity exports, disruptions in supply chain imports, and consumer expenditure dramatically reduced, amongst others.

The United Nations Economic Commission for Africa (UNECA) has also published its predicted growth for Africa, placing the continent between 1.8% and negative 2.6% for the year ahead. Increased poverty levels are a major concern, points out the report, with an expected additional 5 million to 29 million people pushed below the extreme poverty line, i.e. living on less than USD 1.9 per day, due to the impact of COVID-19. This will be brought about by a high rate of unemployment with annual formal job creation forecasted to drop by 1.4% and 5.8%, and job losses estimated at 19 million by the International Labour Organisation (ILO) due to partial or full workplace closures.

According to Veepin Bhowon, an International Trade and Investment Climate Expert and International Economics Consulting Ltd. Senior Associate based in South Africa, these predictions may seem catastrophic, but none the less realistic.

“COVID-19 has indeed brought an unprecedented situation in Africa but it is compounded with other factors that were already present on the continent for several years now. You only have to look at last year’s October edition of the World Bank’s Africa’s Pulse.”

Veepin points out that Africa as a whole was already suffering from major weaknesses in terms of economic outlook for over 20 years now, a fact known to all stakeholders, but which have not been addressed.

“The African continent is still dependent on the export of commodities, oil, industrial metals, mining, etc. Then there are the agriculture exports, raw or semi-processed, to be transformed further elsewhere. But other than in these sectors, there is a lack of competitiveness compared to other manufacturing countries. This is the reason why Africa is flooded by, and highly relies on imports from China, for example.”

Ethiopia, Tanzania and Kenya, points out Veepin, had promising growth outlooks for 2020, placed respectively at 7.1%, 6.4%, and 6%, respectively, by the AfDB Economic Outlook, but they all are dependent on factors that due to COVID-19, can no longer be relied upon. 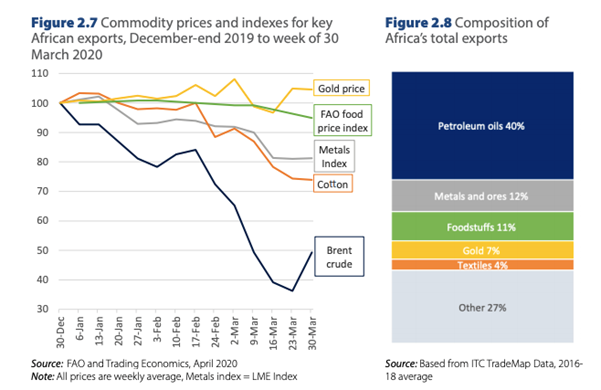 The informal sector, which contributes an average of 34% of Sub-Saharan Africa’s GDP as per IMF estimations (for 2019), will also suffer a huge impact, says Veepin.

“Because of the lockdown, there will be roadblocks, infrastructure problems for the circulation of goods and services, the people in the informal sector, especially the women and those in poorer remote regions, will be faced with greater difficulties. If it is easier for governments to monitor situations in cities and towns, in remote areas, it will be very difficult to reach those who require help, especially when resources are scarce.”

This could plunge a large population into poverty, in line with the predictions of UNECA.

With the threat of a global recession, a debt moratorium has been announced by the international community for poorer countries to soften the impact of COVID-19 as an exceptional measure.

“This would have been a breath of fresh air under normal conditions where Africa was already drowning in debt. But with COVID-19, this will be only marginally helpful as the continent will still take a huge blow. We are in a grey area because where the debt repayment amount could have helped the economy to recover under normal circumstances, there is currently no income to be made, nor are any investments coming in. For the next year or two, it will probably be for each his own”, points out Veepin. 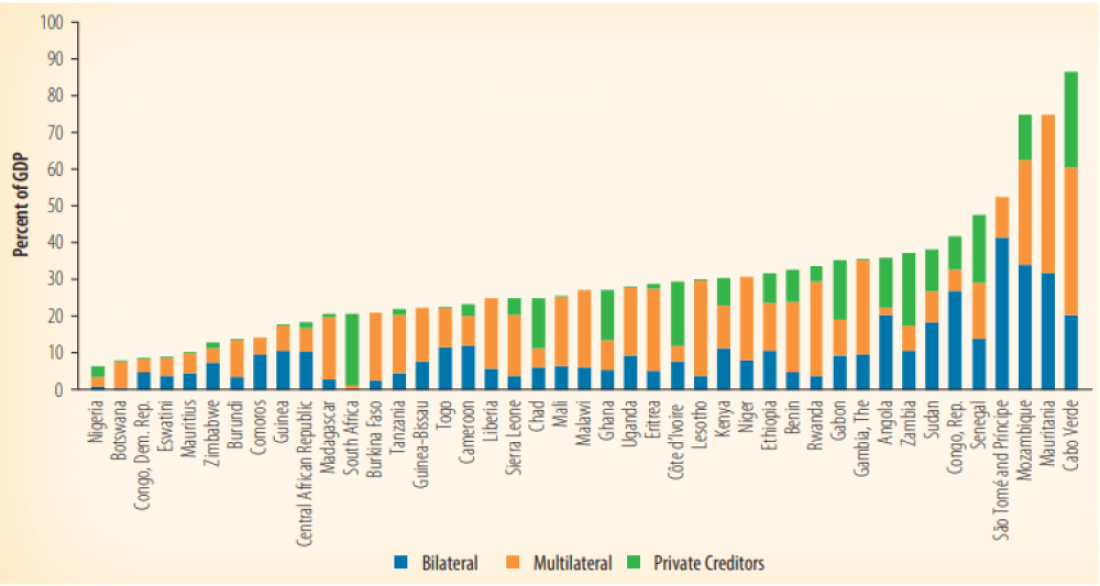 For Veepin Bhowon, African countries should now focus on the implementation of regional policies that have been designed and developed over the past 20 years. Although national measures may be effective in the short-term, proper regional integration is required for the continent to strengthen its economy. While the Economic Partnership Agreement (EPA) and the African Growth and Opportunity Act (AGOA) have helped the continent expand exports to the EU and US, respectively, implementation of the African Continental Free Trade Area (AfCFTA) would enable the creation of large regional markets which would strengthen the economy of the region.

The presence of trade barriers is also a hurdle that needs to be removed, says Veepin. A simple example, he says, relates to processed meat products. While the continent has the capacity to answer the demand for these products, trade barriers on animal feeds make it more expensive to produce and market locally and in the region. Meanwhile, there are no barriers on imports of meat products from other markets outside the region, which is why there are imports coming in from Brazil, one of the largest global processed meat producers, which is on the other side of the globe.

Africa should look towards reshoring as one of the solutions to strengthen the economy, says Veepin, especially as Africa is a strong producer of raw materials.

“Instead of exporting those raw materials, the countries should turn towards processing, to have the finished products made locally. There is a demand, there is a market locally and regionally and Africa should take advantage of that. We should make more sustained efforts towards regional integration.”

Reshoring would create employment and help rebalance trade relations, points out Veepin, although the initial cost could be steeper than offshoring.

“It will also require an import of talent and skills for the capacity building that will be required. But once an industry is established, it will be able to offset the initial costs.”

Several measures taken in different countries on the continent are helping to mitigate the impact of COVID-19 nation-wide. For example, in Mauritius, the Mauritius Revenue Authority (MRA) has set up a scheme where employees in the informal sector can register and receive a relief fund package. As a continent with a large number of people in the informal sector, such a scheme expanded regionally could really help preserve the economy.

With the current crisis, it will take time for the region’s economic recovery, but it can come out of this crisis stronger if the right decisions are taken now. However, in all scenarios, says Veepin, the resilience of the African people themselves, proven time and again through years of crises, is not to be doubted.