The Coronavirus (COVID-19) pandemic has brought the global economy to an unprecedented situation and Africa, as one of the regions that will be hit the hardest in economic terms, should not be held hostage to its fiscal deficit. During these extreme times, governments in Africa and the global community must take bold measures to protect the economy of the continent, to counter the economic impact of the coronavirus.

In just two weeks, Africa has seen its number of detected cases triple. As of 4 May 2020, the continent has recorded almost 45,000 cases, and more than 1,700 deaths. Out of 54 countries, only Lesotho has yet to report any cases. This is a worrying trend, considering that the health systems of many African countries are already under strain with little reserve capacity. An infectious disease vulnerability index published in 2016 by the research organisation, RAND Corporation points out that 22 out of the 25 countries most vulnerable to infection outbreaks in the world are located in the Sub-Saharan region. Should the virus continue to spread in Africa, it would lead to a humanitarian crisis, with social and economic consequences that could devastate the continent. This makes it extremely urgent for policymakers to take the best decisions, not only to save lives but also to protect the economy and the vulnerable populations who risk being pushed into extreme poverty.

Figure 1. Number of cases in Africa.

In an attempt to flatten the transmission curve, almost all African countries have implemented a form of lockdown, some with stricter conditions than others, bringing the economic activities on the continent to a staggering halt. Whilst the United States or countries in the European Union (EU) are committing to stimulus packages worth billions for vulnerable sections of their population, such measures are not feasible in many African countries, as they lack the means to extend such social protection. As the economy slows down, it means that revenue in terms of tax and remittances are also on the decline, making borrowing tough, if not impossible. Many African countries, including South Africa and Mauritius, have also seen their government bond credit rating downgraded due to COVID-19.

However, many African countries are taking fiscal measures to safeguard employment and soften the blow of COVID-19 on local businesses and the informal sector. Mauritius went into lockdown as soon as the country detected its first 3 cases, with only the necessary services left operating. With most economic activities suspended, the government has taken several measures aiming to support households and communities:

Dr Rama Sithanen, ex-minister of Finance for Mauritius, suggests that the measures required to mitigate the impact of COVID-19 would fall under three broad stages. He terms Phase 1 as the “survival kit”, with measures taken to protect public health.

“As people cannot go out to work, many industries are currently on pause, the State has to step in to help people so they can survive. Phase 2 would be the induced coma, the State has to help enterprises through loans, guarantees, sufficient working capital, to keep businesses alive, to cover their costs so as to avoid mass lay-offs. Then at a third stage, there are stimulus packages to help industries in the long-term.”

Dr Sithanen states that the recession could be a very sharp ‘U’ shaped curve with a drawn-out horizontal line, rather than the hoped-for V-curve. In Mauritius, the COVID-19 crisis could mean a long period of inactivity for the tourism sector, and even the textile sector as demand will remain low for quite a long time. For the country to get through the third phase, it would depend on three factors, says Dr Sithanen, the time taken for gradual deconfinement of the country, the change in consumer behaviours and lastly, the effect of the global recession. The fiscal measures taken by the Mauritian government now will play an important role in reviving the economy over the next two years, he says. 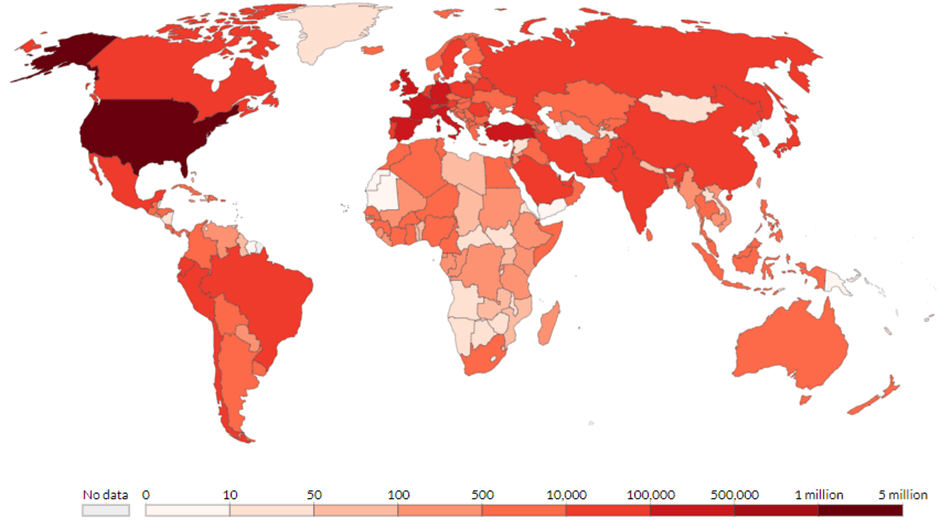 However, Dr Sithanen points out that the fiscal measures adopted by the Mauritian government may not be suitable for the whole of Africa. For example, he says, the assistance provided to the informal sector through the MRA would be extremely difficult to replicate on the continent given the different contexts and structure of their economies. The informal sector is the main source of employment in Africa, accounting for 85.8 percent of all employment, according to the International Labour Organisation (ILO). Informal trade also includes cross-border trade, which makes up 30 to 40 percent of all trade with an estimated worth of USD 17.6 billion within SADC. However, the informal sector has so far been hugely neglected by policymakers on the continent.

Figure 3. Key indicators on size, shape and composition of informal employment in Africa.

Source: International Labour Organisation. The impact of COVID-19 on the informal economy in Africa and the related policy responses. April 2020

The response to Africa’s humanitarian and economic crisis has to be global, affirms Dr Sithanen, and unconventional.

“The situation in Africa was already difficult before COVID-19. South Africa, for example, was already in recession. The situation is such that Africa is having to choose between either dying of COVID-19 if it keeps its economies open for business or dying of hunger if it chooses to lockdown its economies. The continent is in an extreme situation that requires extreme measures.”

The international community needs to help. At this stage, says the ex-Minister, a debt moratorium would not help, but forgiving debts for the countries in order to release the much-needed financial resources will.

“The International Monetary Fund should also increase the Special Drawing Rights[1]  of African countries which would add reserves to their government’s policy options.”

Countries should not be limited by their ability to borrow

Dr Sithanen insists on one vital point that could potentially play a big role in saving the African economy, he says, African countries should not be limited by their fiscal deficit. They should be able to borrow, lines of credit should be open to them during this critical time, even if their credit ratings are low.

Governments across Africa have combined their efforts and taken strict measures to try and flatten the epidemic curve. Compared to other regions of the world, the number of cases is still relatively low, suggesting that the government response is effective. However, many countries in Africa have seen a downgrade in their credit ratings in the wake of COVID-19, which would hinder their ability to issue treasury bonds at advantageous terms. During these extreme times, governments in Africa and the global community must take bold measures to ensure the continent has the necessary fiscal lifeline to fight effectively the virus and revitalise the economy.

Dr Rama Sithanen is an independent Economist and was former Deputy Prime Minister of Mauritius and Minister of Finance, Economic Development and Economic Empowerment of Mauritius between 2005 and 2010. Dr Sithanen is the present Chairman of the Rwanda Development Board and advises the Government of Rwanda on taxes, competitiveness and financial services issues. His comments made here are made in his own personal capacity

International Labour Organisation (2020). The impact of COVID-19 on the informal economy in Africa and the related policy responses. 14 April 2020.

[1] The Special Drawing Right (SDR) is an international reserve asset, created by the IMF in 1969 to supplement its member countries’ official reserves. So far SDR 204.2 billion (equivalent to about USD 281 billion) have been allocated to members, including SDR 182.6 billion allocated in 2009 in the wake of the global financial crisis. The value of the SDR is based on a basket of five currencies—the US Dollar, the Euro, the Chinese Renminbi, the Japanese Yen, and the British Pound Sterling. IMF Factsheet Special Drawing Rights. 24 March 2020