The economies of Sub-Saharan Africa are expected to contract by between 2.1 and 5.1% in 2020 as a result of the Coronavirus impact. The hardest hit would be the mineral and natural resource exporters, as a result of the rapid decline in mineral prices caused by the slowdown in the global economy. According to the World Bank, the region is exposed to food insecurity risks, as well as numerous macroeconomic risks.

Less than 4 months since the first COVID-19 case was detected in China, the disease has spread like wildfire. Worldwide, there have been almost 2 million detected cases, with over 120,000 deaths and more than 200 countries and territories affected. Not only has this pandemic majorly disrupted daily life, creating humanitarian crises and forcing governments to take unprecedented measures to contain the disease, but the level of disruption to economic activity has so far surpassed any predictions made at the beginning of this contagion. It has been widely recognised that the global economy is falling into recession. For Africa, the Word Bank is predicting that the continent’s economy could shrink by as much as 5.1 percent. Although the virus arrived on African shores later than other regions, the continent already has more than 11,000 cases and over 800 deaths. However, insufficient testing capacity in many countries suggests that these figures most likely understate the actual number of infected.

The World Bank anticipates that economic growth in the sub-Saharan region, which has seen some of the fastest growing economies in recent years, will decline from 2.4 percent in 2019 to between – 2.1 percent to – 5.1 percent. The virus will cost the region between USD 37 billion and USD 79 billion in terms of output losses for 2020. This downward growth revision takes into consideration not only the rate of unemployment and reduced productivity of the region but also the sharp decline in economic growth of the region’s key trading partners, namely China and the European countries. With China on a strict lockdown in the early months of 2020, an early look at businesses by China Beige Book shows little indication that the economy has recovered much from the shock of the coronavirus as of mid-April. The European economy would not fare better, when the European Central Bank (ECB) predicted that the region would experience a more severe recession than the rest of the world, with no proper signs of recovery until 2021.

Figure 2 The downward scenario illustrates the adverse impact on growth 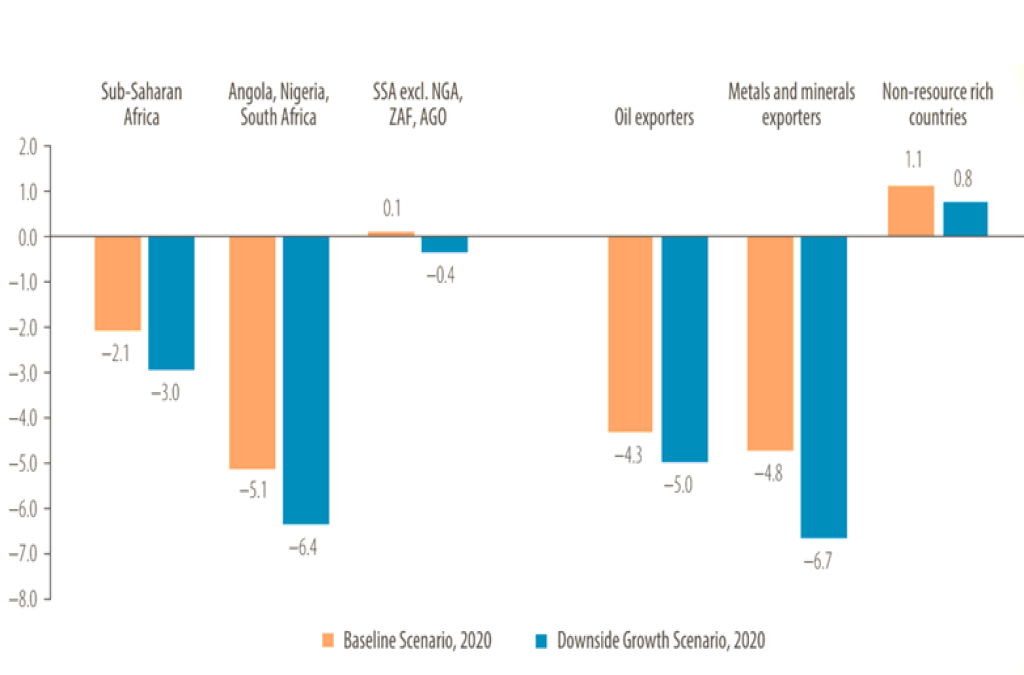 Source: World Bank staff estimates based on simulations with the MFMOD model.
Note: These charts were generated on the basis of specific assumptions about the inherently uncertain progress of COVID-19 and the policy responses to it. As such, they should be interpreted as illustrative rather than predictive.

Another major blow to African economies is the fall in commodity prices which have been on a downward slope since mid-January, with countries that depend on oil exports and mining expected to be hit the hardest. Industrial metals prices have suffered from lower demand, with significant declines in copper (-19 %), nickel (-18 %), and zinc (-16 %). Oil prices have been on a free-fall, currently standing at a little less than USD 30 a barrel, suffering its worst one day decline since 1991 in early March. The World Bank predicts that growth could fall by up to 7 percentage points in oil-exporting countries and by more than 8 percentage points in metal-exporting countries compared with the no-COVID base case.

The World Bank report warns that the COVID-19 crisis has the potential to create a severe food security crisis across Africa. Agricultural production is likely to see a decline of between 2.6 percent in the optimistic scenario and 7 percent in the scenario of a sub-regional trade blockage due to non-cooperative responses. Food imports could also decline substantially (from 13 to 25 percent) due to a combination of higher transaction costs and reduced domestic demand. Compounded with other factors affecting agriculture like fragility, conflict, violence, natural calamities, and the locust invasion in East Africa, the food situation in the region is of particular concern.

Due to deteriorating fiscal positions, heightened public debt vulnerabilities, underdeveloped financial markets and weak monetary transmission, African governments do not have much room in deploying economic policies to address the crisis. Temporary debt relief will be necessary choice for fighting COVID-19 while preserving macroeconomic stability in the region. A debt moratorium would immediately inject liquidity and enlarge the fiscal space of African governments. According to the World Bank, the region may need an emergency economic stimulus of USD 100 billion, potentially sourced from the global community, including international financial institutions, bilateral official creditors, and the private sector, in order to considerably soften the impact of COVID-19 on the continent.